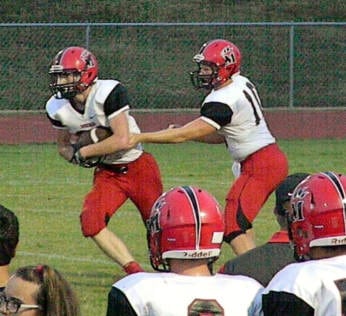 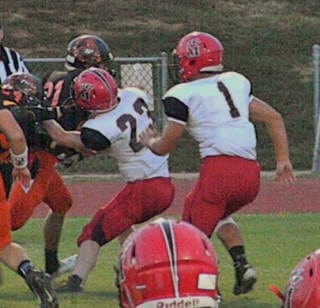 On a night when lightning filled the sky in Scott County, the Mena Bearcats (2-1, 0-0) had enough electricity in their offence along with an aggressive defense to take down the previously undefeated Waldron Bulldogs (2-1, 0-0) at Bulldog Stadium.

Bearcat Jr. Ty Cole got Mena on the board first with a 39 yd touchdown pass from Jr. quarterback Carson Cannon. Waldron got on the board with a field goal in the first quarter to make the score 7-3. In the second quarter, Jr. all-purpose back Justin Dean got loose in the Waldron secondary and went 59 yards for a Bearcat TD. Cam Broderson�s PAT was good and Mena led 14-3. With under a minute to play in the half, Waldron culminated a drive and pounded the ball over the goal line and added a two point conversion to make the half time score 14-11, Mena.

The second half saw the Bearcats begin to impose their will on Waldron and wear the Bulldogs down as the game went along. Cannon scored on a 4 yd run and the PAT took the margin to 21-11. In the fourth quarter, place kicker Cam Broderson connected on a 24 yard field goal to make the score 24-11 Mena. Then later in the fourth quarter Mena forced a punt that Justin Dean fielded and took 59 yards for a touchdown. Waldron added a late score to set the final at 31-18 Mena.

For the game Dean rushed 10 times for 102 yards. Cannon rushed 14 times for 89 yards and Jr. Ryan Ozanich rushed 4 times for 15 yards. Through the air, Cannon was 8-16 for 101 yards and a touchdown. Ozanich caught 4 passes for 39 yards and Cole had one catch for a touchdown of 39 yards. Defensively Jr. Elijah Snider and Soph Johnny Gunn both led the team with 7 tackles. Tyler Redding, Ozanich and David Belknap all had 5 stops.

Next up is 7-4A conference play as Mena travels to take on Ashdown who lost this past week on a late 52 yard field goal against Hamburg. Game time at Ashdown is 7:00 and is the first conference game for both teams.